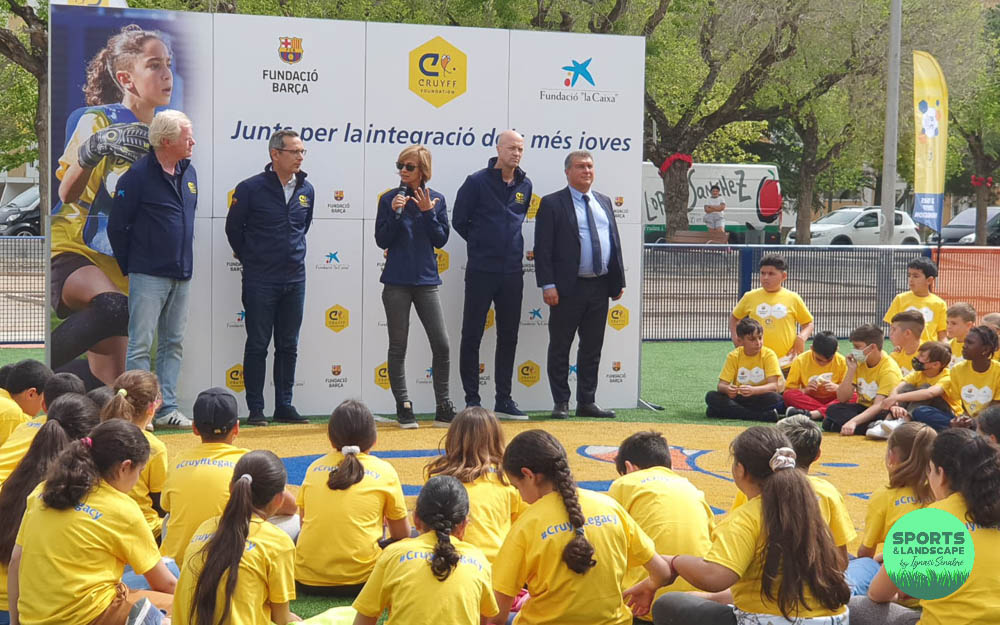 The inauguration of the new Cruyff Court in Constantí, in Tarragona, has been very special. The event has been held exactly on the day that this charitable initiative celebrated its 25th anniversary and the field has been dedicated to Jordi Cruyff, son of the historic footballer whose legacy the Cruyff Foundation commemorates, in this case with the collaboration of the “la Caixa” Foundation and the FC Barcelona Foundation.

The manager of Sports & Landscape, Ignasi Senabre, attended this celebration, which was chaired by Jordi Cruyff himself and by the president of FC Barcelona, ​​Joan Laporta. It also included the participation of the president of the Foundation Cruyff, Susila Cruyff; the director of the Foundation, Pati Roura; the representative of the “la Caixa” Foundation, Alejandro Fernández, and the Mayor of Constantí, Óscar Sánchez.

The Cruyff Court Constantí, which has been in operation for some time now, is the fourteenth football pitch that the Cruyff Foundation has inaugurated in Catalonia with the aim of promoting sport as a means of social inclusion. Sports & Landscape has been in charge of assembling all of them, a collaboration that fills the company with pride.

The Cruyff Courts are small free-use football pitches to promote sports and healthy habits, as well as boosting values ​​such as responsibility and self-improvement.

In his speech, Joan Laporta underlined the revolution carried out by Johan Cruyff in the world of football. “His philosophy is alive and he will continue to lead us down the path of success”, he added in reference to “the mentality of healthy and winning ambition that Cruyff always had”.